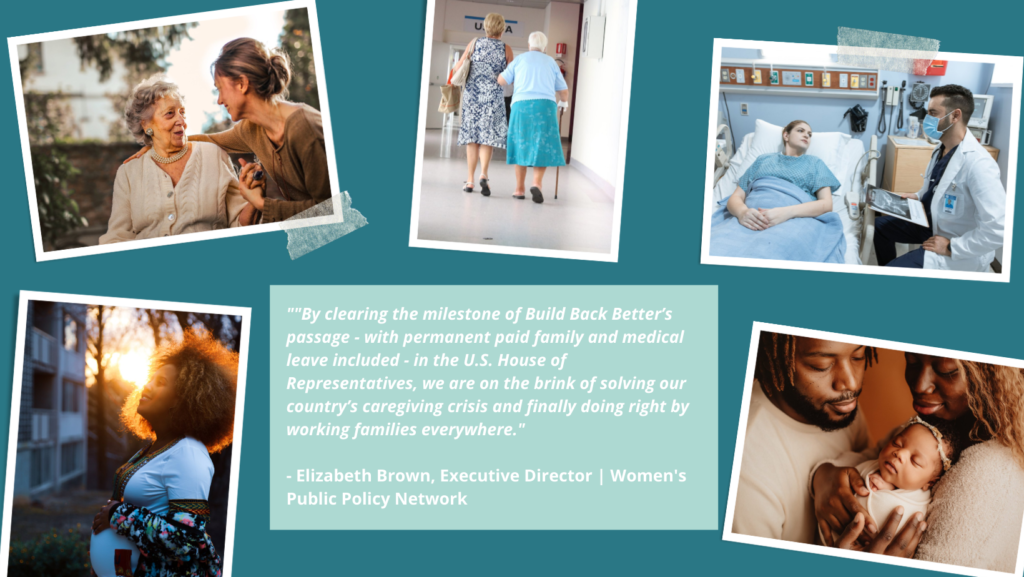 Today, the U.S. House passed the Build Back Better Act, President Biden’s $1.75 trillion climate and economic agenda. Along with crucial investments in our strained child care system and an expansion of the Child Tax Credit, the House-passed bill also included the nation’s first paid family and medical leave program. This sets up transformational change for women, families, and our economy.

“Today we are celebrating the inclusion of paid family and medical leave in the U.S. House-passed Build Back Better bill. We call for its inclusion in the final bill too, which — together with the Child Tax Credit, universal pre-K, and childcare support — would make Build Back Better the most transformative bill for families in U.S. history.

“Paid family and medical leave is a basic necessity for women, families, and every American. Whether for a newborn baby, an ill parent or family member, or our own personal medical emergency, we all need paid leave.

“For far too long, the United States has lagged the rest of the world in ensuring every person has access to paid leave when it’s needed most, leaving a gaping hole in the safety net for women and families and exposing our economy to the vulnerabilities of an unsupported workforce.

“Only 20 percent of workers overall – and just eight percent of low-wage workers – have access to paid family leave through an employer. Black and Latina women are even less likely to have access, compared to white women, which exacerbates the wealth gaps and racial disparities for families of color.

“Meanwhile, labor force participation for women has always been low — due to a lack of access to paid family leave — but the Covid-19 pandemic blew the lid off this problem. Millions of women were driven from the workforce because of the challenges of caregiving while working. There has never been a more urgent need to solve the caregiving crisis than right now.

“By clearing the milestone of Build Back Better’s passage – with the inclusion of a permanent paid leave program – by the U.S. House of Representatives, we are on the brink of solving our country’s caregiving crisis and finally doing right by working families everywhere.”