This blog post is the third in a series of issue spotlights we’ll be sharing over the next few weeks to highlight the findings of our State Legislative Scorecard project. Be sure to check out the first blog post in the series, highlighting how state leaders can address domestic and sexual violence in Ohio.

THEN: D grade — Lack of attention and action on legislation that would strengthen the state Earned Income Tax Credit to support more working families.

The Earned Income Tax Credit is a crucial policy that has proven to help lift working families out of poverty, and it is particularly important for working mothers with low-incomes struggling to make ends meet. It is estimated that 64 percent of households in Ohio claiming the federal EITC are households with working women. The support families receive through the EITC is vital for low-income workers facing barriers to full economic security, especially for women who are overrepresented in low-security and low-wage jobs.

During our recent Facebook Live Discussion on the Statehouse Scorecard, Kalitha Williams, with Policy Matters Ohio,  explained that a strong EITC can help reduce these barriers by providing working mothers in Ohio with additional support to invest back into their family, using their refunds towards basic needs such as food, housing, health care, child care, and transportation. EITC claimants in states with refunds often use their refund towards their child care expenses, which cost, on average, more than $14,000 per year for a one-year-old child according to research from Policy Matters.

Despite the role that the EITC can play in helping to lift families out of poverty, our state legislature from the previous session failed to take action on legislation that would make key improvements to the policy. Lawmakers and advocates attempted to advance policy change through the state budget process, and as stand alone legislation, but it failed to gain traction last session.

NOW: Positive action on making key improvements to our state’s EITC — but more action is needed to make the largest impact.

This session, though, lawmakers made key improvements to strengthen the State Earned Income Tax Credit through Ohio’s two-year transportation budget. The transportation  budget, which passed out of the Legislature with bipartisan support and was signed by the governor earlier this year, expanded the state EITC from 10 percent to 30 percent of the federal credit, while also removing the cap. However, Ohio’s EITC remains non-refundable, which is one of the greatest limitations to the policy, and the Legislature failed to address this shortfall in the transportation budget.

Supporting a refundable EITC would help women, particularly women of color who are overrepresented in low-wage jobs, support their families and continue to work. While this change was not made with the other improvements to the EITC during the transportation budget process, there is still an opportunity for the state legislature to build on the work they have done to improve the state EITC. Ohio House Bill 114, legislation introduced in the Ohio House at the start of this new session, would make the EITC refundable, however, the bill has not received even a sponsor hearing yet.

Additionally, we worked with our partners at Policy Matters Ohio to push for this key improvement to be made through the state operating budget, calling on members to support a provision to make the state EITC refundable. Ultimately, the House and Senate budget did not include this change, and amendments to make the EITC refundable were rejected by both chambers. The Republican-led General Assembly failed to pass the state operating budget by the legal deadline of June 30th, passing a short-term funding fix to provide more time for them to negotiate a final operating budget. As they continue to work through the process, we are urging members to make concrete changes for working families by making the state EITC refundable.

The mismatched priorities are clear: A bill recently introduced in the House would offer a refundable tax credit for donations to so-called Crisis Pregnancy Centers, fake health care centers which often mislead women about their health care options. Instead of offering donors a refundable tax credit for fueling misinformation and medically in-accurate lies, lawmakers should support low-income working women and their families by making the state Earned Income Tax Credit refundable.

This post is the third in a series of blog postings we will be publishing to provide a deep dive into the ‘Then’ and ‘Now’ of what our State Legislature has done on core issues affecting women and families. Stay tuned throughout the summer for current updates on child care, paid leave, maternal health, and reproductive health care. For additional information on our Statehouse Scorecard Report, take a look at the resources below: 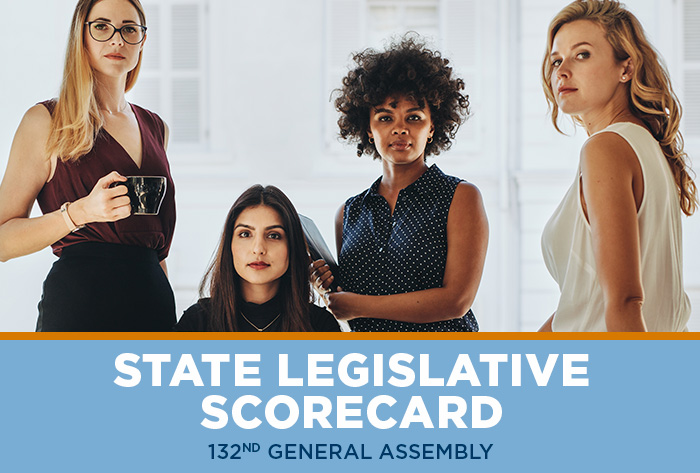