Women are affected by domestic and sexual violence at higher rates than men, and the majority of women who are physically abused by an intimate partner are also victims of other forms of abusive behavior, such as financial or sexual abuse. Survivors and victims of sexual assault often experience short-term and long-term consequences to their physical, social, and mental health, including physical injuries, PTSD, anxiety, and depression. And domestic and sexual violence not only impact women’s health and safety, but also permeate into the workforce: affecting productivity, jeopardizing the safety of victims and co-workers, and increasing absenteeism and employee turnover. In fact, research estimates that the average lifetime cost of intimate partner violence for women is nearly $104,000.

All women deserve the opportunity to lead economically secure, safe, and healthy lives free from violence, however, Ohio’s laws related to sexual offenses currently fall short of providing a pathway to justice and closure for some survivors. These barriers must be addressed by our state lawmakers to ensure that our justice system appropriately responds to the needs and rights of all survivors.

Ohio Senate Bill 162 (Antonio, O’Brien), legislation with bi-partisan support, has the potential to fix two major shortfalls that push justice out of reach for some survivors and victims: closing the “spousal exemption” loophole for sexual offenses and removing the statute of limitations for prosecuting rape. The bill received a second hearing last week, providing a platform for advocates, survivors, and legal experts to make the case for why action is needed on this crucial legislation. We were proud to stand among the many proponents to call for the committee to support and advance this crucial piece of legislation. 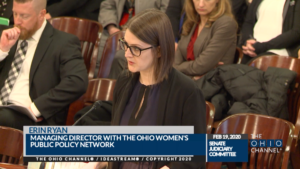 “[The “marital exemption” for rape] is deeply rooted in victim-blaming culture and reinforces an outdated belief that married women are the property of their husbands. It is far past time for Ohio to update our laws, which currently send the message that rape of a spouse is not a crime and less serious than other forms of sexual violence.” – Erin Ryan, Managing Director, The Ohio Women’s Public Policy Network

The first component of Senate Bill 162 would address the antiquated notion of how sexual assault is treated differently within marriage. Although rape within marriage is technically illegal in the United States, loopholes in our state code currently provide no legal options to prosecute the crime in certain circumstances (where there is no “force or threat of force”) if the perpetrator is married to their victim.

Approximately 10-14% of married women report that their spouses raped them, and experts believe this is an underestimate, with many more cases are likely to go unreported. Perpetrators of rape within marriage often repeat their abuse multiple times. However, many victims may not identify rape or assault due to outdated notions of sexual assault within marriage and victim-blaming culture. These unjust exemptions protect perpetrators while also preventing many survivors from seeking legal recourse. 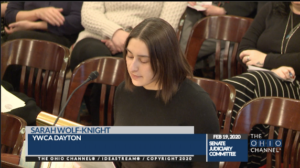 “Senate Bill 162 empowers survivors with the language and legal options to face marital sexual abuse. The passage of this legislation will allow Ohio to overcome harmful and antiquated norms regarding a woman’s ownership of her own body and allow married survivors to have the same protections from sexual assault as unmarried ones.” Sarah Wolf-Knight, Advocacy and Grants Manager, YWCA Dayton

By removing the “spousal exemptions” for rape, Senate Bill 162 would remove a major hurdle to justice facing survivors of rape at the hands of their spouse: the ability to seek legal recourse against the crime. Ohio is one of only twelve states that has not updated this archaic law to provide full legal protections against sexual offenses to married victims. This long overdue legislation would remove this barrier to justice, bringing Ohio’s laws into the 21st century.

The second piece of this legislation would align Ohio code with the growing evidence that the statute of limitations for prosecuting rape and other sexual crimes is outdated – leaving many women unable to seek justice for crimes that are not reported and advanced within a certain time period. The current statute of limitations of 25 years supports the pervasive belief that the quality of physical evidence deteriorates or is lost over time.

However, this artificially imposed deadline has two major flaws. First, DNA technology has drastically improved in recent years, making the concerns about lack of evidence unfounded. Second, the statute of limitations does not take into account that survivors of sexual assault often face trauma, economic barriers, and social stigma, all of which may prevent or delay them from reporting the crime. An arbitrary deadline should not prevent survivors of sexual violence from seeking justice, and Senate Bill 162 removes this barrier by eliminating the statute of limitations. 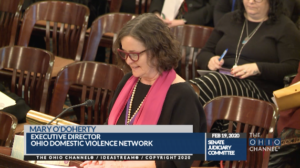 “It understandably takes time for these survivors to come forward and tell others what happened. It takes time – and sometimes healing and treatment – to be able to endure a civil or criminal trial as a victim of a sex offense. SB 162 recognizes that for victims of sex crimes – especially those perpetrated by someone so close to the victim – the statute of limitations must be removed for the justice system to be meaningfully available.” – Mary O’Doherty, Executive Director, Ohio Domestic Violence Network 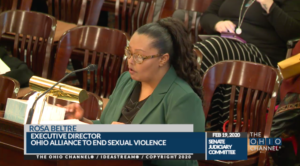 “We have worked with hundreds of survivors – many of whom have debated whether to report for decades. There are few things our team knows with more certainty than this – the statute of limitations for rape is arbitrary and ignores criminal justice data, neuroscience, and the experiences of Ohio survivors. We are uniquely here today to focus on doing what is right for survivors. Survivors deserve to be taken seriously. They deserve to have justice and healing, no matter how long it takes. This is the right thing to do. It is the only thing to do.” – Rosa Beltre, Executive Director, Ohio Alliance to End Sexual Violence

The current laws around the spousal exemption and the statute of limitations for sexual crimes have severe consequences for women in Ohio. SB 162 takes important steps forward to modernize our laws and more effectively support the needs of survivors of sexual assault. The passage of this bill is vital to ensuring that victims and survivors of sexual offenses are able to seek legal recourse and justice, regardless of whether or not they are married to the perpetrator and without an arbitrary deadline imposed by the statute of limitations.

Want to stay updated on the status of Senate Bill 162? Sign up for our newsletter to get weekly updates on legislative developments on this bill and other issues that impact women and families.