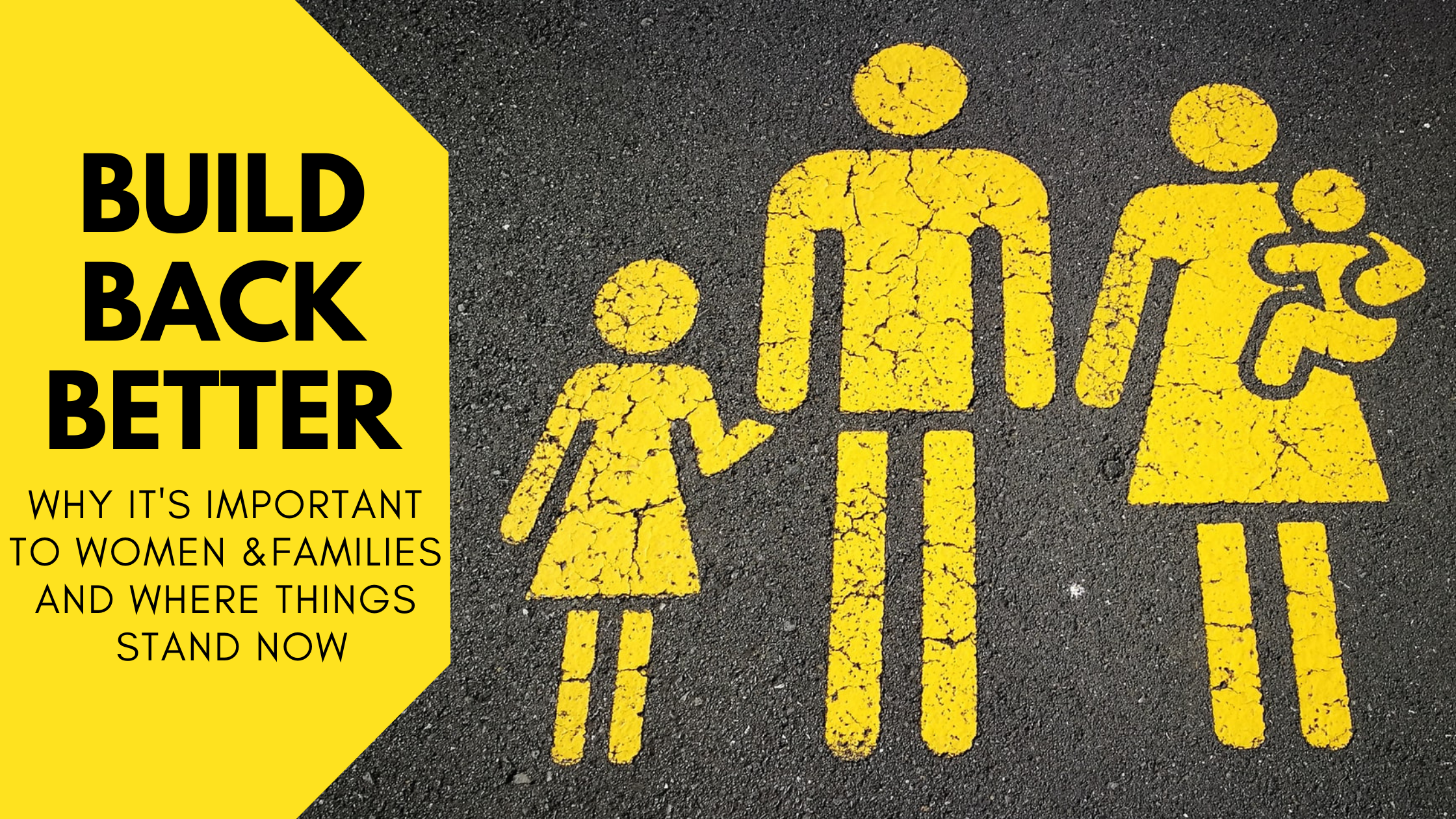 Build Back Better: Why It’s Important and Where Things Stand

In case you’ve gotten lost on the current status of President Biden’s Build Back Better plan, we’re here to get you up to speed on where things stand and why it’s important for working families. Build Back Better aims to invest $1.75 trillion in children and families, creating millions of jobs in clean energy and other sectors while empowering Americans – especially women – to join and remain in the labor force. The bill passed the U.S. House in November 2021, but was stalled after negotiations with Sen. Joe Manchin (D-WV) came to a standstill in December.

In early 2022, President Biden admitted that Build Back Better will likely have to be passed in chunks, with the initial package passed by reconciliation requiring only a simple majority of the Senate to be in support. Any provisions left out will require a higher bar of bipartisan support to pass in the future. The big question at that time was, what provisions would make the cut.

Now, after weeks of fits and starts behind the scenes, Sen. Manchin has come forward with another proposed compromise. He has come back to the table with an even more slimmed down version of the economic package, proposing that his colleagues choose one 10-year program to focus on, such as paid family leave, with the other half of revenues raised to fund the package devoted to deficit reduction and fighting inflation. With Build Back Better under renegotiation, here’s a little primer on three of the original provisions that offer key supports for working women and families and where they stand now.

Offering the largest investment in childcare in American history, the Build Back Better plan establishes universal preschool for all 3-4 year olds. The childcare components are the most transformational expansion of education in 100 years. Offering long-term educational benefits to children while confronting the unfeasible cost of childcare, the plan ensures working families will pay no more than 7% of income on childcare. Sen. Manchin has voiced support for this part of the plan, so a re-worked Build Back Better plan may still include it.

The U.S. currently is the only industrialized nation in the world that does not provide some form of guaranteed paid family leave. Under Biden’s original Build Back Better plan, families would have access to up to four weeks of paid leave from their jobs, enabling them to welcome a new baby, care for children, siblings, parents, or grandparents facing a serious medical issue, or address their own medical emergency while continuing to be paid and ensuring they have a job to return to. Today our labor force is under massive strain, with an estimated 2.3 million fewer women workers as a result of the pandemic. Women of Color and those with lower incomes have faced the biggest barriers to returning to work and recovering financially, and 17% of parents have quit work to care for children during the pandemic. An overwhelming 9/10 American families would benefit from this transformational combination of paid family leave and expanded childcare. American families – and especially women – need reliable, affordable childcare and paid leave. But Sen. Manchin opposes this provision, so it’s on the chopping block.

The Child Tax Credit, expanded in 2021, offered the biggest tax cut for working families ever, providing up to $300/month per child to 39 million American households. U.S. Senator Sherrod Brown (D-OH) has been a vocal supporter of continuing the Child Tax Credit, emphasizing its impact on cutting child poverty, which disproportionately affects Black and Brown children. According to the NAACP the expanded Child Tax Credit would cut child poverty overall by 44.9% and reduce Black child poverty by 54.2%, a crucial step towards dismantling the persisting inequity of racial income gaps. Nearly 90% of American children will qualify for the credit, and the vast majority of low-income families report using the credit to cover costs for rent, food, clothing, and other basic needs. The Child Tax Credit expired at the end of 2021 and payments to working families ended on Jan. 15. Our most vulnerable children and families need an expansion of the child tax credit now. Though President Biden reaffirmed his belief in the provision this week, he also admitted he is not sure he will be able to get it into the package, since Sen. Manchin is not in favor of its inclusion.

Build Back Better is incomplete without each of these important provisions, so whether they are passed now as part of the overall package, or piecemeal later, they must pass. The combination of these initiatives could save most families more than half of what they currently spend on childcare. A two-parent family of four would save up to $7400 in annual costs, and a single mom with two children would save up to $15,000 annually. Every one of those dollars can be reinvested by families into the resources they most need. We can’t afford to wait while our failing childcare infrastructure and lack of good-paying jobs prevent American families from getting back to work. The time to invest in working American families is now.

About the Author: Heidi Weaver-Smith is a Jr. Fellow with Innovation Ohio and the Ohio Women’s Public Policy Network, and she serves as the Operations Director of Little Bottoms Free Store, building supportive community, providing basic needs, and sharing resources with the diverse families of young children in Central Ohio. Her policy interests include workplace equity, accessible and affordable childcare, and ending violence against women and girls.