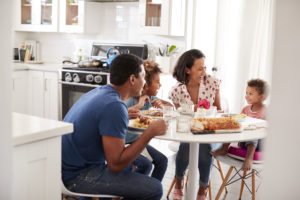 Every ten years, the United States Census Bureau conducts a count of the entire U.S. population, known as the census. The census determines a lot of important information, including government representation and the allocation of critical federal funding for programs such as Medicaid, SNAP, and housing assistance. Getting a complete and accurate count is important, especially for women and their families who have a lot at stake in the census – and women will play a key role in ensuring this happens.

One of the most fundamental outcomes of the census is the determination it plays in the allocation of federal funding to the states. In Ohio, there are more than $33 billion dollars in funding for public programs on the line, and many of those programs provide crucial support women and their families need to live healthy and economically secure lives.

For many women, the funding that could be forfeited due to an incomplete census count would jeopardize their family’s health, safety, and financial stability: The mother who relies on federal aid to receive quality child care, allowing her to continue to work and provide for her family. The young woman who receives STI testing and prevention through access to Medicaid. The woman who has turned to Ohio’s network of domestic violence shelters for protection and the help she needs to get her family on their feet.

There is probably no greater example of the weight of the census for women than Medicaid dollars. Women comprise the majority of the adult Medicaid population – before the passage of the Affordable Care Act and today. Medicaid is a crucial resource for women to access the healthcare they need, and it impacts women’s ability to remain healthy and join or stay in the workforce. Whether it’s pregnancy care, postpartum care, Pap tests, timely blood pressure checks, or other preventative services, women have a lot on the line when it comes to Medicaid funding.

Because women often serve as family caregivers, the stakes are even higher. Two in five female-headed families with children are living in poverty – that’s nearly 90 percent higher than that of male-headed families with children. These mothers and their children rely on full funding for programs like SNAP, the Children’s Health Insurance Program, Head Start, and even housing vouchers.

Not only are women one of the biggest groups impacted by the census, but they play a crucial role in ensuring that an accurate count happens at all. Census research indicates that one person often takes the lead in filling out the Census for the whole family. Women, who are increasingly the main caregiver or head of household, are more likely to take the lead in their families. As the 2020 Census approaches, it’s important to recognize the key role Ohio women play and the outsized impact an incomplete count will have on their livelihood and their families.